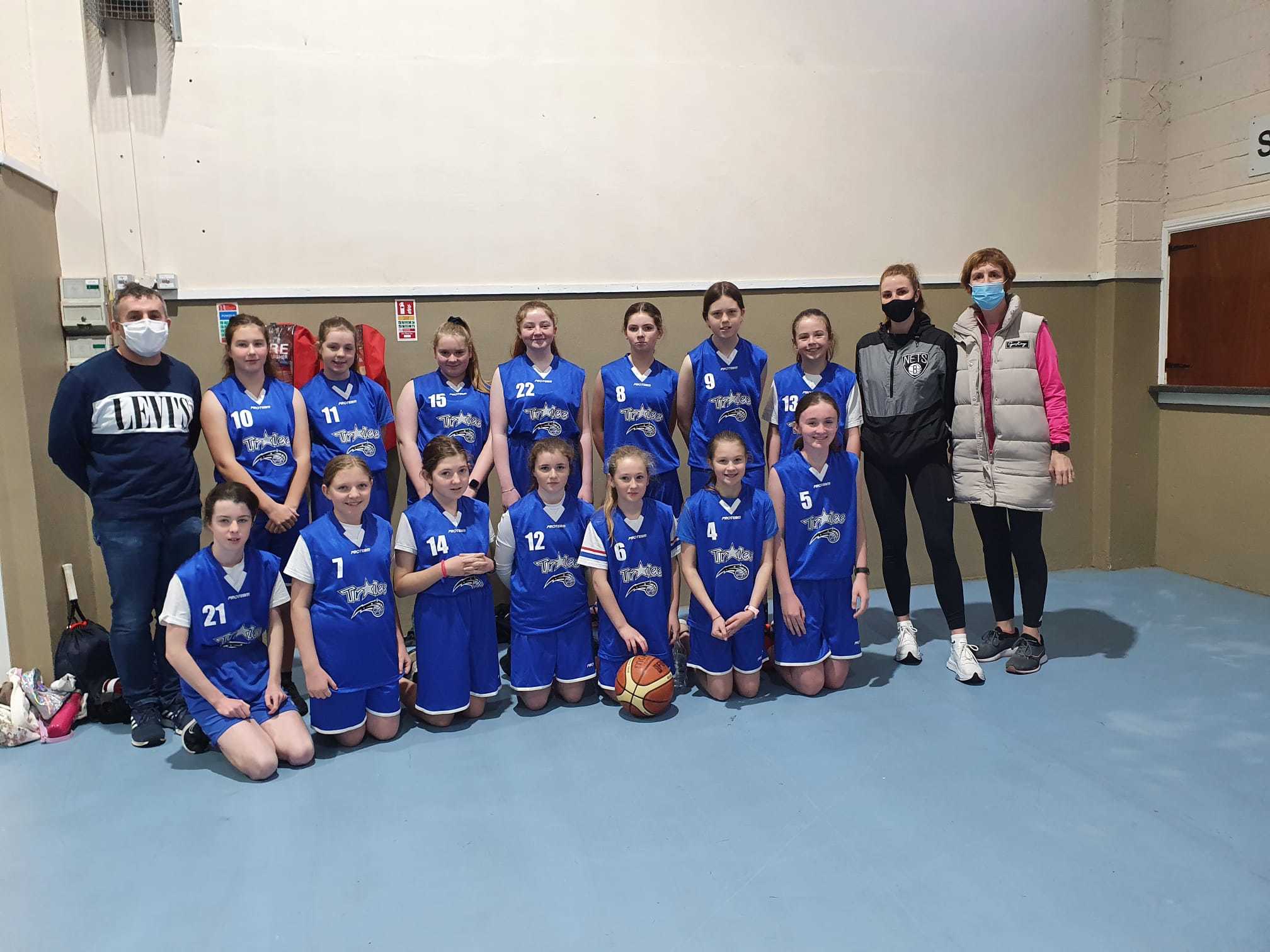 At The CBS THE GREEN 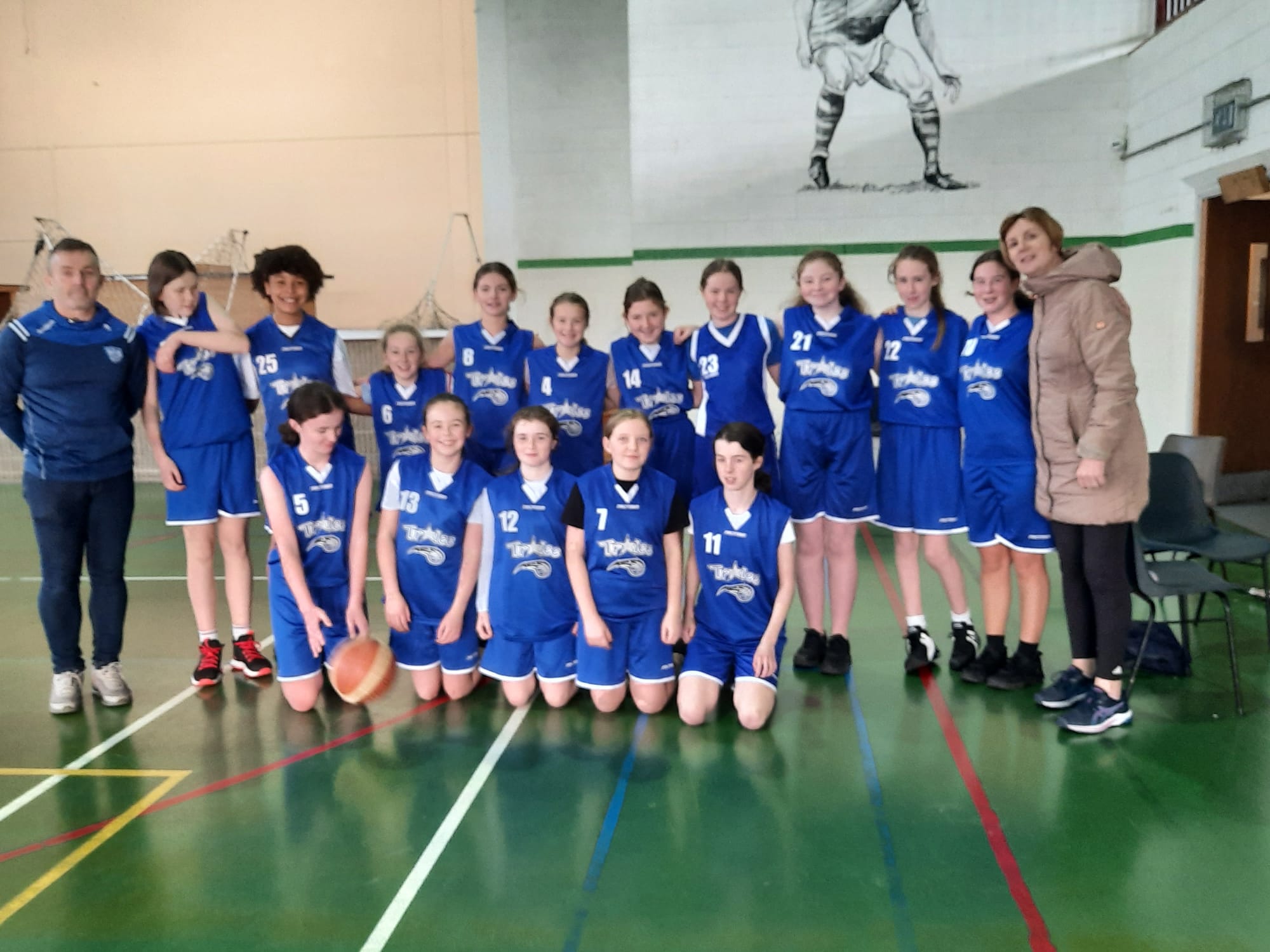 Our U14 Girls Team 2 continued their season on Saturday morning against TK Vixens at CBS (The Green).

Evelyn Moriarty was unavailable due to injury, we wish Evelyn a speedy recovery and look forward to having her back on the court.

The game started positively for Imperials with a basket straight from tip off. Great work from Naomi Osibodu found Niamh Fitzgibbon who finished with class. Both defences were on top during the early exchanges in the quarter. Caoilainn Culloo and Naomi Osibodu were particularly impressive in defence, and great running by Penny Costello was causing difficulties for the opposition. As the quarter entered the final stages, Juliette Gleeson stamped her authority on the game. Juliette scored 3 great baskets in succession giving Imperials an 8-0 lead at the end of quarter 1.

The roles were reversed in quarter 2. TK Vixens stormed into proceedings with a great running game. Imperials were defending well but under serious pressure. As the quarter progressed Vixens dominance began to translate to the scoreboard. 9 unanswered points in the quarter left the score at 8-9 at half time in favour of TK Vixens.

TK Vixens continued their dominance in quarter 3. Imperials defence had tightened significantly, limiting Vixens to 4 points during the quarter. Sarah Slattery scored a superb basket near the end of the quarter, leaving the score line at 10-13 in favour of the opposition.

The 4th quarter began with some good scores for the opposition. They had extended their lead to 20-10 mid way through the quarter. Imperials rallied superbly at this stage led by Aoife O’ Connell, Caoilainn Culloo and Naomi Osibodu. Aoife scored 2 baskets to narrow the lead to 6. Sarah Slattery was also contributing hugely and followed up with a great score. With the TK Vixens defence under pressure, Aoife O’Connell was really coming into the game. She again got to the basket to reduce the deficit to the minimum with 36 seconds on the clock. Imperials fought for every ball but it was not to be, TK Vixens took the win on a score line of 18-20.

Congratulations to TK Vixens on the win, and thanks for a very enjoyable and sporting game.

As always a huge thanks to the Referees and our Table Officials.

The Imperials bench all got game time, with some valuable experience gained. The Management team of Brenda, Leanne and William are delighted with the effort and application and look forward to the weeks ahead.

On a final note, the U14 Girls and Management would like to wish the very best of luck to Tralee’s own Eoin Quigley who lines out for Ireland against Austria on Sunday afternoon at the National Basketball Arena. The game is live on TG4 at 16:50, which will give us all the opportunity to cheer on Quigs and the national team 🏀🏀🇮🇪🇮🇪 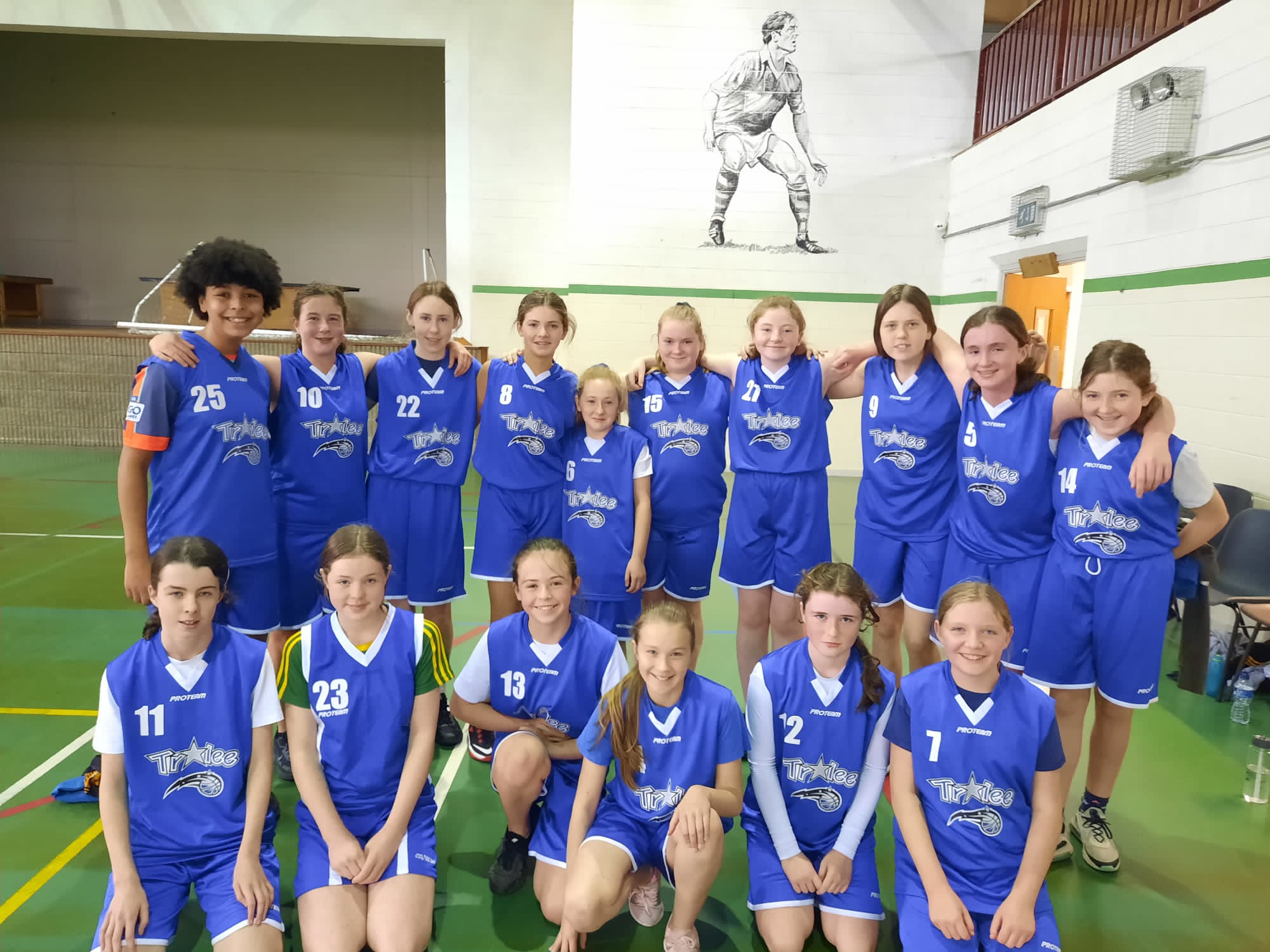 Our U14 Girls Team 2 continued their season on Saturday with a home game against local rivals St Brendan’s.

The first quarter opened with strong defensive work from St Brendan’s and scores were at a premium. Juliette Gleeson opened the Imperials account with a great basket. Imperials showed positively in transition, with Maria O Connell, Caoilainn Culloo and Juliette Gleeson combining well, to find Penny Costello in space, with Penny finishing brilliantly. At this stage Aoife O’ Connell stormed into the game with strong running and 2 great baskets. The final score of the quarter fell to Penny Costello who was involved in everything. Imperials with a slender 10-5 lead at the end of quarter 1.

Imperials really raised the intensity level in quarter 2. Evelyn Moriarty and Naomi Osibodu combined well with Naomi finishing superbly. Evelyn then turned from provider to scorer with a great long range effort. At this stage Imperials were growing in confidence and beginning to take a hold on the game. A brilliant run from Keelin Reidy found Evelyn Moriarty free, and Evelyn duly obliged with a super score. Keelin Reidy and Aobh Cronin followed up with 2 great baskets, after great defensive work by both. The score of the game came from Sarah Slattery with seconds remaining in the half. Keelin Reidy securing a great turnover in her own half, before finding Sarah free with a superb pass. Sarah finished brilliantly to give Imperials a 22-5 lead at half time.

The 3rd quarter began with Imperials under a lot of pressure defensively. St Brendan’s started strongly with some early scores on the board. Imperials slowly began to get to grips with the threat as the quarter progressed. Clodagh Burke was strong in defence for Imperials, with Lauren Foley, Niamh Fitzgibbon, Katie Enright and Maria Walsh doing well in transition.  The introduction of Naomi Osibodu during the quarter really steadied the Imperials ship, with Naomi securing turnover after turnover in an awesome display. The quarter closed with Imperials leading 22-13. All eyes focussed on the final quarter with St Brendan’s staging a strong comeback!

Penny Costello opened the Imperials account in quarter 4 with a superb effort. Aoife O’ Connell followed up with 2 great lay ups after great runs from defence. At this stage Naomi Osibodu and Caoilainn Culloo were immense in defence for Imperials. They also popped up at the other end to finish superbly, giving Imperials a slight cushion going into the final minutes. At this stage Imperials ran the bench with all girls contributing strongly to the win.

The support of the girls for each other during the game was a joy to behold!

Special mention to Amber Ryan who was on the bench today but injured. We wish Amber a speedy recovery and look forward to having her back on the court with the girls.

A huge thanks to St Brendan‘s for a very sporting and enjoyable game. Thanks as always to the referees and our wonderful table officials.

A final word of thanks to all the parents, without whose help and support this couldn’t work. The girls are a fantastic group and we’re delighted to be part of the team!

We return to action on Wednesday evening with a home game against St Colman’s. 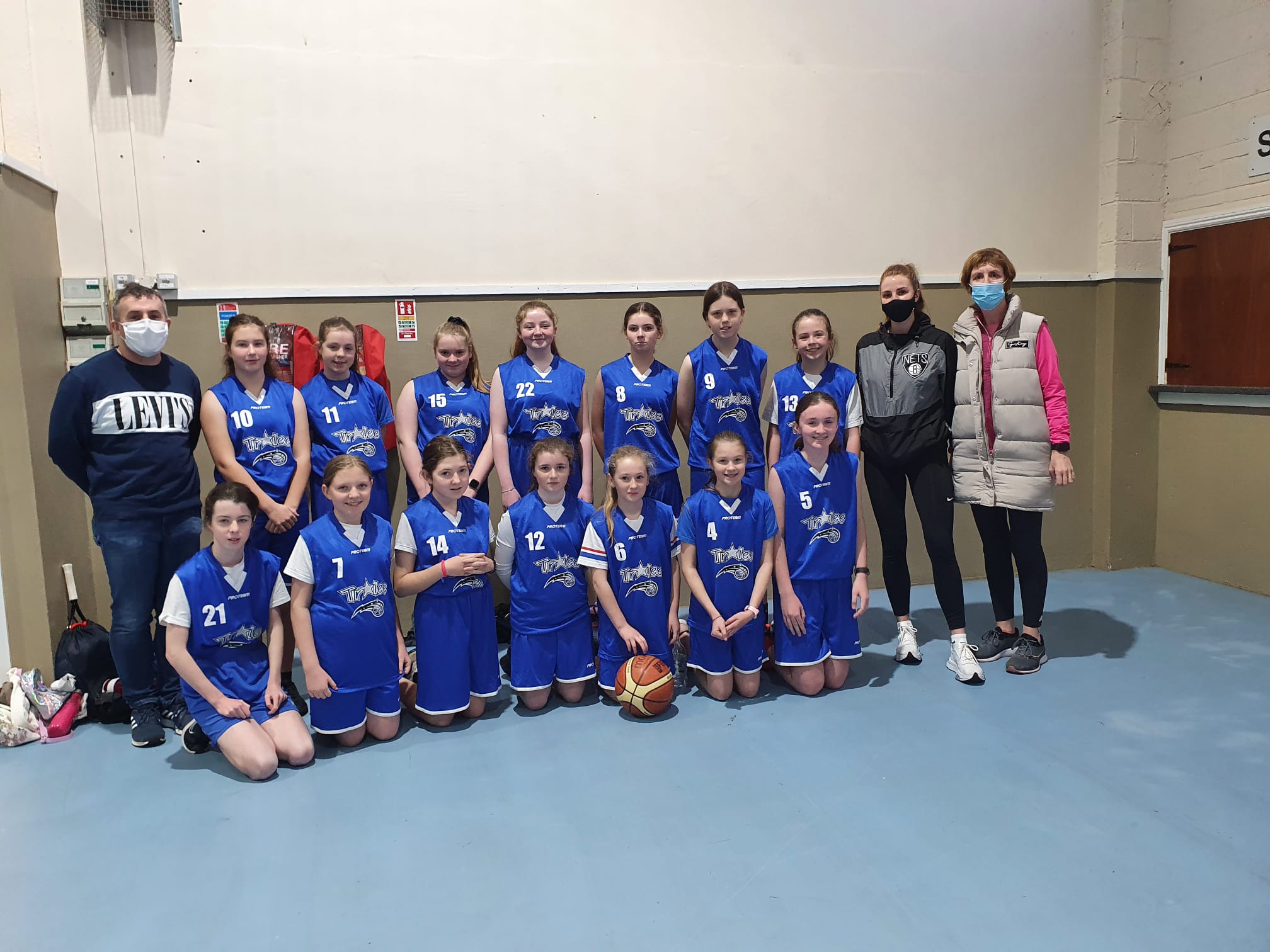 Our U14 Girls Team 2 began their season against St Mary's in Castleisland on Saturday. It was brilliant to see both teams take to the court for competitive basketball. We had our 1st score on the board after 48 seconds, a great pass from Aoife O'Connell found Penny Costello, who finished superbly. 2 further scores from Penny and a brilliant effort by Lauren Foley left the score 8-5 at the end of Q1.

The 2nd quarter began at an electric pace. A fantastic 8 points in this quarter from Evelyn Moriarty, and a great score from Niamh Fitzgibbon extended the Imperials lead to 18-9 at half time.

The 3rd quarter was very evenly contested with both defences on top. 2 baskets from Sarah Slattery kept the scoreline ticking over with a Q3 score of 22-13.

The 4th quarter began with some great turnovers on both sides. Baskets from Juliette Gleeson and Caoilainn Culloo kept Imperials in front. The final score of the game, came from Niamh Fitzgibbon, a brilliant individual effort, collecting a rebound under her own basket and finishing majestically to the delight of the Imperials bench. A fitting score for Niamhs performance.

All players got valuable game time on the court and showed great effort and enthusiasm. Our teamwork was fantastic and we look forward to the year ahead.

Well done to both teams on a very sporting game. Thanks as always to St Mary's for the wonderful facilities.